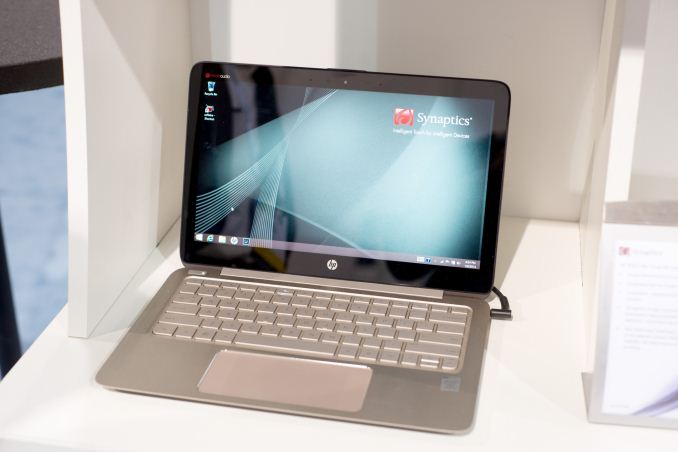 I stopped by Synaptics' booth at CES to spend some time with its new Clickpad 2.0. I'd been briefed on the new Clickpad a couple of months ago and was told that it resolved all of my issues with the performance/behavior of PC clickpads. With Clickpad 2.0 Synaptics not only supplies the clickpad controller but also some (all?) of the mechanicals, including the hinge. It's a fully integrated solution that isn't much more expensive than what an OEM will spend putting together their own from multiple vendors. The result is dramatic. Not only does Clickpad 2.0 allow for more consistent click response regardless of where you press on the pad, it also does a very good job of palm rejection.

Clickpad 2.0 is shipping on HP's new Spectre 13 and I got to play around with the system at CES. First off, the Spectre 13 features a huge clickpad. Windows 8 edge gestures are supported and they worked pretty well. Usually in the first few minutes with any PC clickpad I can identify a bunch of frustrating behaviors (false gestures, improper thumb rejection), but with the Spectre 13/Clickpad 2.0 I couldn't identify any. It really takes multiple days of use to determine whether or not a clickpad is absolutely problem free, but Synaptics continues to show the most promise out of any of the controller/clickpad vendors I've been exposed to. The big question remains whether or not we'll see Synaptics' solutions used across the board on PC notebooks.

Synaptics claims north of 60% marketshare among PC notebooks, however there's always the issue of PC OEMs sourcing clickpad/controllers from multiple vendors. Some OEMs are good about single sourcing within a particular product line, while others will choose from a mix and attempt to smooth over differences with their own software layers. ASUS remains one of the few major holdouts from adopting Synaptics in its notebooks, which is a shame given how much progress ASUS has made as a notebook manufacturer. 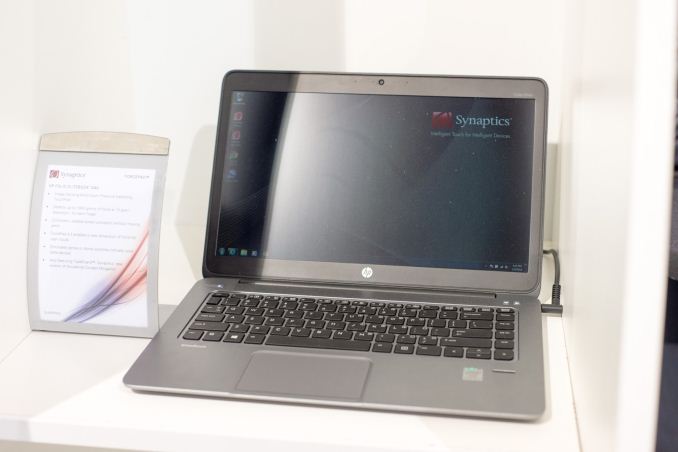 I also got to play with Synaptics' ForcePad solution. As its name implies, ForcePad is a trackpad that can measure pressure, which enables a new category of pressure driven gestures. The obvious example is using finger pressure to adjust scroll speed. Aside from pressure sensitive gestures, ForcePad does away with any mechanical clicks (instead relying on taps/pressure driven clicks) and as a result contributes to a thinner notebook. If the end game is building notebooks that are even thinner than the thinnest Ultrabooks, exploring options like the ForcePad will be necessary. The solution works well, although I'm still a fan of the more traditional hinged clickpad.

Finally I poked around with Synaptics' latest ThinTouch reference design. This is a capacitive keyboard that uses keys that physically move, but without the scissor actuation of a chiclet keyboard. The advantage is an incredible reduction in thickness, while still maintaining much of the feel of a chiclet keyboard.

Synaptics demonstrated how ThinTouch could enable keyboards that fold completely when not in use, which can help to further reduce the z-height of a notebook. There were also a few demos showing how you can swipe your finger/hand across a ThinTouch keyboard to activate gestures in Windows 8 (e.g. bringing up the charms bar, switching between apps, etc...). Synaptics is talking to OEMs about ThinTouch now and expects to see the first solutions to leverage its ThinTouch technology to hit the market later this year. 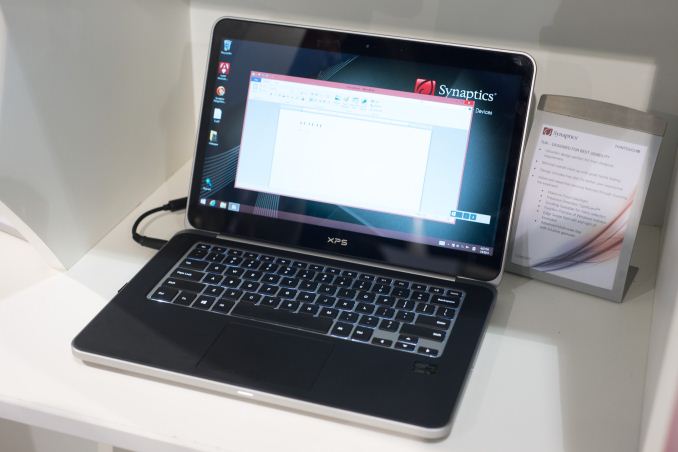 It's pretty remarkable just how much Synaptics has done since ex-ATI/AMDer Rick Bergman took over just two and a half years ago. Long term I do wonder how viable a 3rd party touch controller maker can be in a market that loves integration. The good news is that Synaptics really has the talent/know-how to be a great acquisition target for one of the big SoC vendors, the question is whether or not any of them will realize it before attempting to duplicate Synaptics' efforts internally. I'd honestly love to see good touch controllers integrated at the SoC level, that would be a huge step towards fixing the mess that is today's varied clickpad experience on PCs.