Samsung Announces Gear VR: A VR Harness For Your Note 4 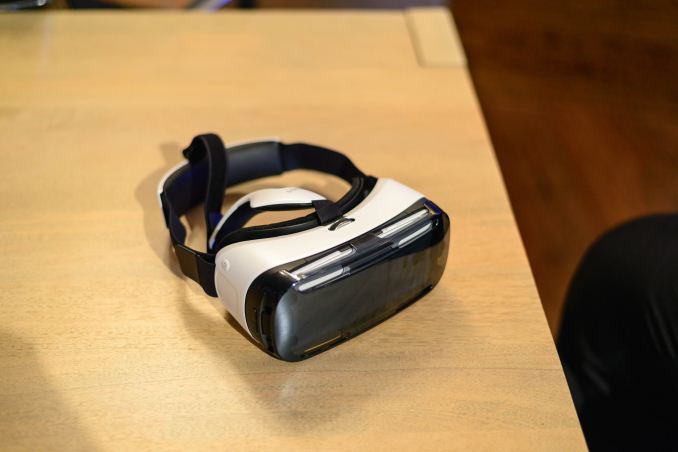 Alongside today’s announcement of the Galaxy Note 4, Samsung also used the occasion to announce that they intend to break into the nascent VR headset market with their own device. Dubbed the Gear VR, Samsung is making a very different and very smartphone-centric take on the VR headset concept. For that reason the fact that this device was announced at the same time as the Note 4 was no mistake or even a convenience. Instead the Gear VR is functionally a peripheral for the Note 4; the Note 4 itself is the heart of the device, and the Gear VR is the harness to utilize the Note 4 as a VR headset.

The idea of using a phone or phablet as the basis of a VR headset is not new, but Samsung’s Gear VR project is the most serious and complete implementation of the idea yet. Gear VR follows up on Google’s Cardboard VR concept, replacing the hacked together DIY construction with a retail grade manufactured harness. Otherwise the idea is similar in execution: phones and phablets already have the screens, sensors, and gyroscopes necessary to build a basic VR headset, so why not? And the Note 4 in turn is the newest and most advanced of these devices.

Meanwhile Samsung for their part already has an interest in VR headsets and a business relationship to help make it a reality. Samsung is the manufacturer behind the display used in the Oculus Rift DK2, which uses the 1080p SAMOLED screen from the Note 3. With Samsung already involved in VR headset manufacturing, it’s only a slight extension on their part to take advantage of their in-house technology to go it alone and build their own headset out of the newer Note 4 hardware. As Samsung Display Corp. seems to only be willing to provide the latest and greatest SAMOLED panels to Samsung Mobile, there is potential to ship a VR display more compelling than anything else on the market. 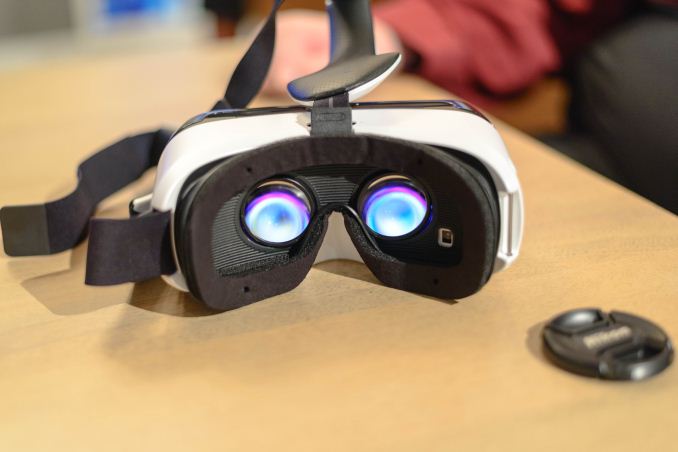 So how does the Gear VR work? With the Note 4 proving the heart of the device – the display, the processing, and the sensors – the Gear VR harness itself provides the mechanism to hold the phone in place, including the lenses necessary to focus on the Note 4 at such a close distance and to adjust that focus. However the Gear VR is also an I/O device of its own to allow access to the Note 4, since the phablet and its touchscreen are inaccessible while it’s locked into the harness. 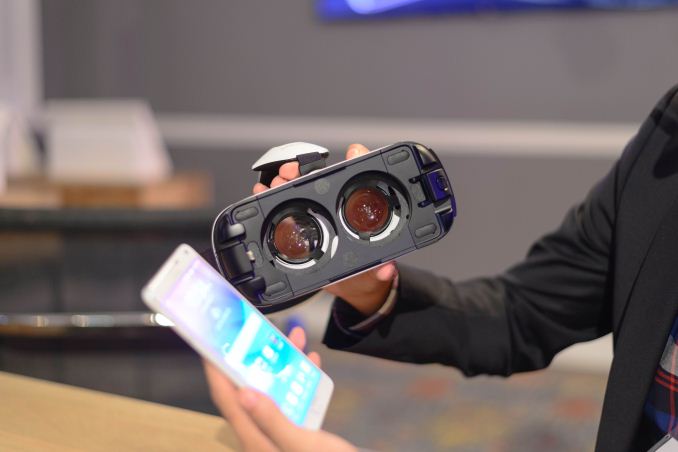 Utilizing the micro-USB connection at the bottom of the Note 4, the Gear VR grants the combined setup a small touchpad and a back button to allow basic operation and navigation, along with additional controls for volume (note that audio either comes from the Note 4 or an external headset, the harness has no speakers of its own). This setup isn’t a full replacement for the Note 4’s buttons and touchscreen, but it’s meant to offer a basic interface that’s used in conjunction with pointing-by-viewing to allow simple controller-free operation of the headset. It’s also worth noting that the harness doesn’t have a power source of its own, so it’s drawing from the Note 4’s own power supply. 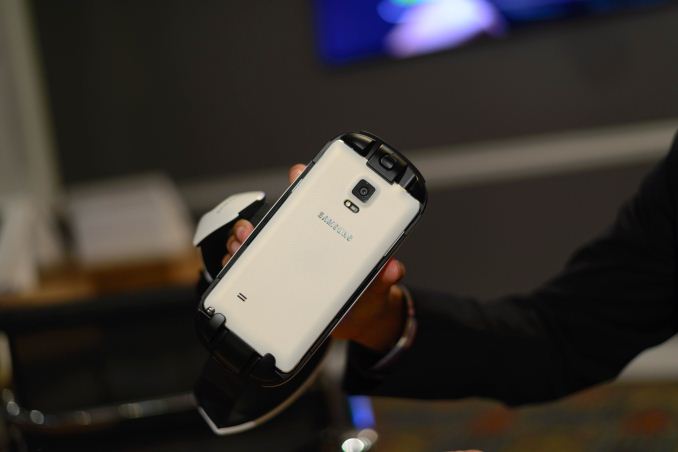 Meanwhile one thing that is important to note is that unlike other VR headsets such as the Oculus Rift and Sony’s Project Morpheus, the combined Gear VR headset is designed to be a stand-alone device. It’s not merely a display and I/O interface for an external game console or PC, but as in the Google Cardboard concept is a complete and self-contained device.

This is an important distinction because it sets a baseline for what kind of content Samsung can reasonably offer and support on the headset. The Note 4 is a modern and high performance phablet, but at the end of the day it’s powered by an SoC-class GPU that offers a fraction of the performance of a game console or PC. Which is not to say that you can’t game on it, but given the hardware it’s clear that Samsung is not in direct conflict with Oculus VR or Sony for the hardcore gaming market.

Consequently the bulk of Samsung’s demos were focused on panoramic 3D video playback, which is a low intensity task that the Note 4 isn’t challenged by. In this case the headset can be used to look around the panorama, making it seem as if the viewer is in the middle of the action. Along with the panoramic videos, Samsung also had an Iron Man themed demo to showcase the device’s interactivity potential, using the Gear VR setup to look around a mockup of Tony Stark’s lab and to activate certain gimmicks and informational displays. Finally a simple space sim dubbed Escape Velocity was present to demonstrate the gaming possibilities for the device, though gameplay was limited to looking and shooting due in part to the limits imposed by the hardware and I/O options. In the longer term all of these are closer to technical demos than complete products, so Samsung will need Android developers to embrace the Gear VR setup if they wish to round up a good collection of content. 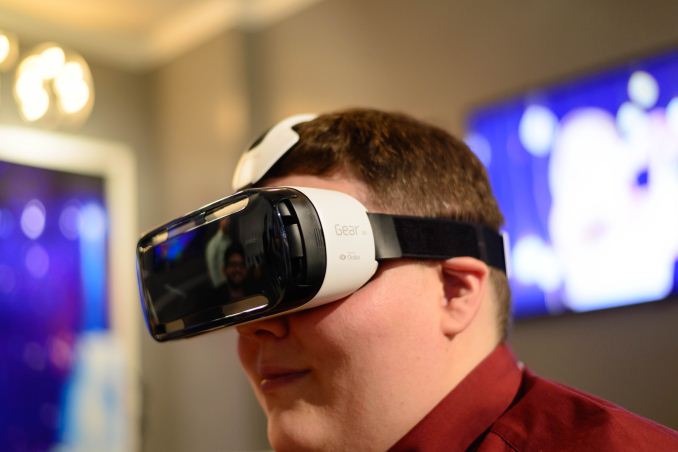 Meanwhile the hardware itself was solid. In our brief look at the demo units it’s impractical to do a proper side-by-side comparison with any other VR headsets, but Samsung has put together a solid piece of kit. The adjustable headstraps offer enough range to fit most heads – even my own (if just barely) – and the adjustable focus means just about anyone with good vision should be able to make the headset work. However, correction seems to be limited to around -3.5 diopters for those that are near-sighted. In addition, no correction is possible for those with astigmatism. The headset also does not accommodate for glasses. 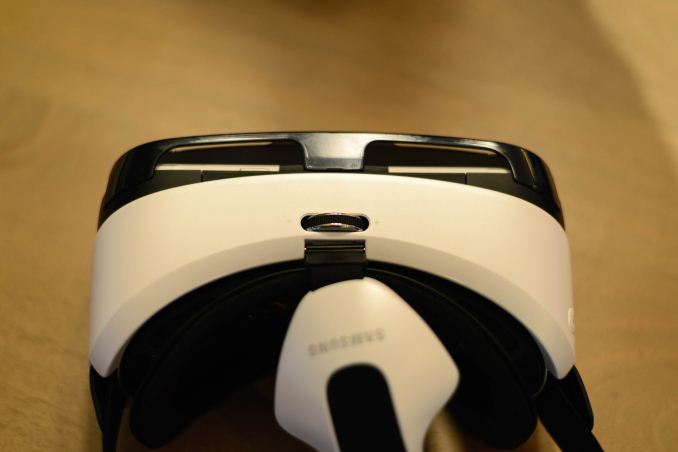 Elsewhere the inputs live up to their stated goals of providing limited I/O for the Gear VR, though I did manage to accidentally hit the back button more than once. Overall the Note 4 gives the overall setup some heft, but not enough to make the setup heavy or uncomfortable, at least for short periods of use. 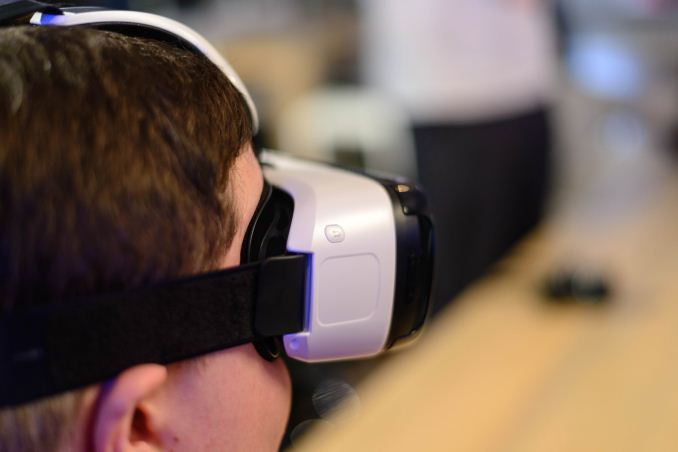 Which on that note, Samsung is suggesting a 30/15 rule for the device: 30 minutes of use, followed by a 15 minute break. This limited playing window avoids any concerns about extended use of VR headsets while also bypassing any battery life concerns since the Note 4 needs to power every aspect of the combined setup.

Otherwise the star of the Gear VR is the Note 4’s display, which is currently unparalleled among SAMOLED displays. At 2560x1440 pixels (Quad HD) and with the rapid response time of OLED, the Note 4’s display is a natural fit for a VR headset. With the Note 4 packing a 5.7” screen, the pixel density on the Note 4’s panel works out to roughly 515 PPI, one of the highest pixel densities yet and a good fit for an application that is so density-sensitive. However this is complicated by the now typical use of a pentile subpixel arrangement in a Samsung OLED display. The 515 PPI density makes the pixels harder than ever to see, but they are still visible and the subpixel layout exacerbates this to some degree. Based on our experience this may very well be better than any other VR headset display so far, but the holy grail for VR headsets may be a 4K display in similar dimensions.

Meanwhile it’s interesting to note that while this is a Samsung device it is being promoted as a product of a “deep technical partnership” with Oculus VR. The press release Samsung will be sending out with today’s announcement even specifically notes that the Gear VR is “powered by Oculus technology”. Unfortunately Samsung isn’t going into any real detail on what that partnership entails at this time. Since Samsung is building all of the hardware, the most likely collaboration is on the software and/or the optics. Though in either case any presence that Oculus VR has in the development of the Gear VR is not immediately obvious when you use it. 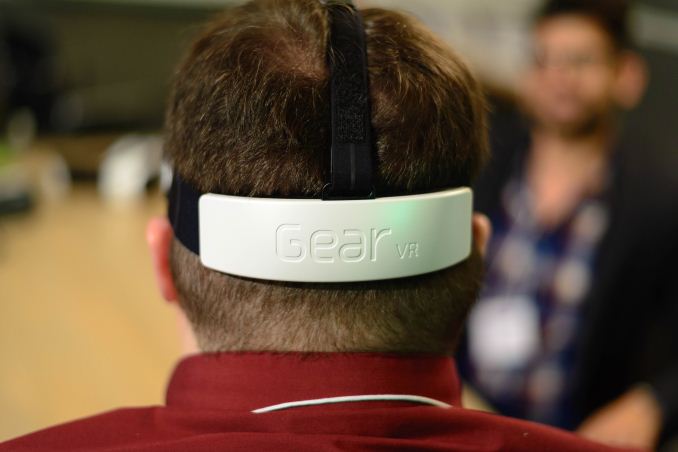 Wrapping things up, in the longer term we do have some concerns about the viability of the Gear VR compared to other VR headsets, but with the modern incarnation of the VR headset industry so new, these are questions that only development time and consumer adoption can answer. Which is also why Samsung is wisely approaching this in an Oculus Rift-like manner by pitching this first iteration of Gear VR at early adopters under the product title "Samsung Gear VR Innovator Edition." The difference is somewhat semantic – Samsung and even certain carriers will be selling the Gear VR harness to anyone that wants it – but Samsung does make it clear that they’re not shooting for wide consumer adoption quite yet.

On the hardware side, one of the biggest technical questions that Gear VR raises is whether the sensor suite on a smartphone is really good enough for this line of use. Oculus VR for their part has been focusing on very low input latency as a major component of VR headsets, for example. And even though this is an early adopter product this is something Samsung has paid more attention to than we would have expected. Samsung is specifically listing the device's "Motion to Photon" latency in their product specifications, which for the Gear VR is stated to be less than 20ms. 20ms is a particularly important threshold for VR headset latency, since among other things this is the maximum amount of latency that John Carmack has stated he feels is acceptable.

Meanwhile on the consumer side there’s the question of consumer interest. Does a Note 4 converted into a VR headset offer enough functionality to satisfy consumers? Gaming still seems like the killer app for VR headsets, and that’s the area where an SoC-powered device like the Gear VR is going to be the most handicapped.

For the answer to these questions and more, we’ll have to see what happens with the Gear VR once the Innovator Edition begins shipping. Like the Note 4 itself, Samsung isn’t committing to a date or a price at this time, but their best estimate for a launch date for the Gear VR is this fall with a price to be determined.