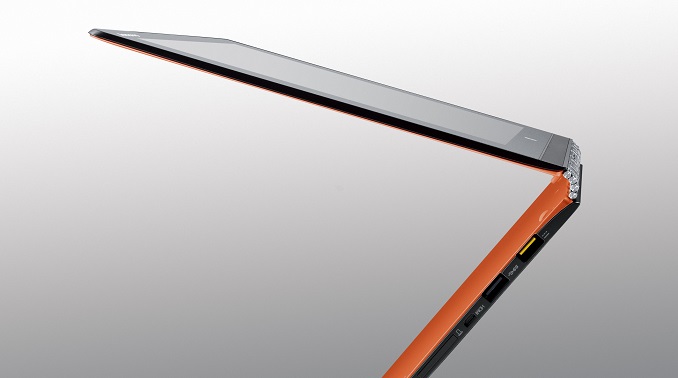 Today in London, Lenovo took the wraps off of a refresh of the entire Yoga series, starting with the new Yoga 3 Pro, then moving to the new Yoga Tablet 2, and finally, the release of a new member to the Yoga line – the Yoga Tablet 2 Pro. The key feature of the Yoga series is flexibility, hence the name, and for the Yoga products it comes down to the hinge. The Lenovo Yoga line were the first laptops to feature the fold around hinge, and then later they brought a shorter version of that hinge to their Yoga tablet lines in order to allow for multiple usage modes as well. 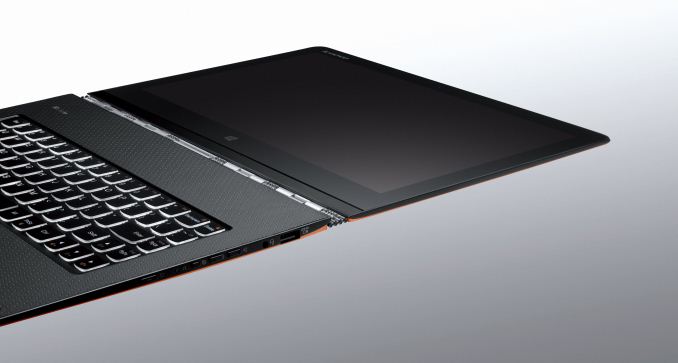 The Yoga 2 Pro, which we reviewed earlier this year, is a 13.3 inch convertible notebook which has a hinge that can be opened 180° to let the laptop be used in the stand mode, tablet mode, and tent mode, as well as the traditional notebook mode. It is a very well implemented feature with the Yoga 2 Pro, but Lenovo thought they could do better, and with today’s announcement of the Yoga 3 Pro, Lenovo has revealed a new “Watchband Hinge” which allows the laptop to be even thinner and lighter than the Yoga 2 Pro. The new model is 17% thinner at 12.8 mm thick, and 14% lighter than the outgoing model at 1.19 kg. The hinge now has six focus points, up from two on the Yoga 2 Pro, and the watchband hinge is constructed of more than 800 pieces of steel and aluminum. The 13.3 inch 3200x1800 QHD+ display is back, but we do not know yet if it still has a RGBW matrix or not. The display is now covered in Corning Gorilla Glass. One weak spot of the Yoga 2 Pro is the audio quality, especially when using the device in multiple modes which can have the speakers pointed away from the listener. Lenovo hopes to address this shortcoming with JBL speakers with Waves Audio which adjusts the audio depending on which mode the device is in. The Yoga 3 Pro is powered by the Intel Core-M processor, which should mean an increase in battery life (Lenovo claims 9 hours) and the possibility of it being fanless. Storage options are up to 512 GB of SSD, and Wi-Fi is now 802.11ac. There are three colors available, with Clementine Orange, Platinum Silver, and Champagne Gold. Prices start at €1,599 and the new device will be available at the end of October. 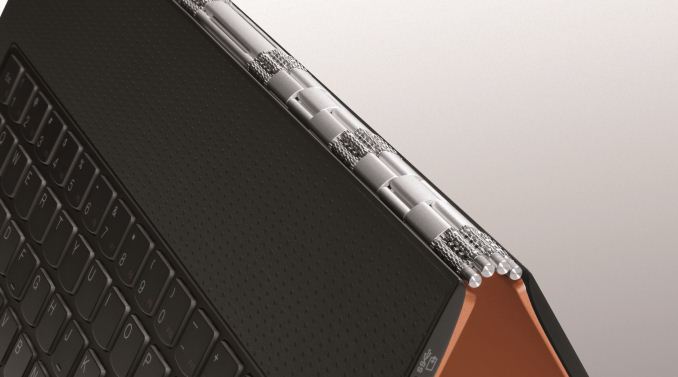 Next up on the docket was the Yoga Tablet refresh. The Yoga Tablet was available in both 10 inch and 8 inch screen sizes, with Android as the operating system. The new Yoga Tablet 2 models will also come in both 10 inch and 8 inch versions, but now the Tablet 2 is available with either Android 4.4 or Windows 8.1. The original Yoga Tablet had a barrel hinge on one side, which allowed the user to use the tablet in a stand mode, tilt mode, or the hold mode, and the Tablet 2 line will feature the new “Hang Mode” which is simple a slot cut in the stand to allow it to be hung from something. The hinge barrel allowed the Yoga Tablet a larger battery than other similar sized devices, and the Tablet 2 promises the same 18 hours of battery life. The screen resolution is now 1920x1200, with dual front speakers and LTE is available on both 8 inch and 10 inch Android versions, and the 10 inch Windows version. The CPU of choice for all of the Yoga Tablet 2 models is now the Intel Atom processor, which Lenovo is claiming gives them three times the CPU performance and twice the GPU performance of the outgoing models. The 8 and 10 inch Android models will be on sale starting today at a starting price of €229 and €299, respectively. The 10 inch Windows version will be available in late October for €399, and the 8 inch Windows model will come in November starting at €249. 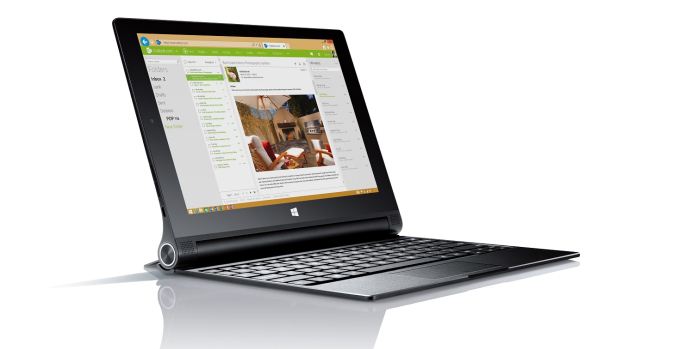 The final product announcement is the bigger Yoga Tablet 2 Pro. Lenovo conducted focus groups to get a better feel for what people actually do with their tablets, and they found 80% of users never take their tablet out of the home. They also found that 52% of users use the tablet to watch long form video such as television and movies, and 56% of users share the tablet with multiple users. In an effort to be “the world’s best home entertainment tablet” Lenovo has added some interesting features that have never before been seen on a tablet. As with the standard Yoga Tablet 2, the Yoga Tablet 2 Pro features a barrel hinge for the stand. Lenovo has placed a micro-projector inside of the barrel, in order to allow people to share content by projecting it. Coupled with that is a new 8 watt JBL 2.1 speaker system, which includes a 5 watt subwoofer on the back of the tablet. The final piece of the Yoga Tablet 2 Pro is to address users who never take the tablet out of the home. The Pro version has a 13.3” 2560x1440 QHD IPS display. With the additional battery space allowed by the barrel hinge, Lenovo is claiming 15 hours of battery life for the Intel Atom powered tablet. Unlike the smaller tablets, Android is the only offered operating system for this model. Pricing starts at €499 with availability the end of October. 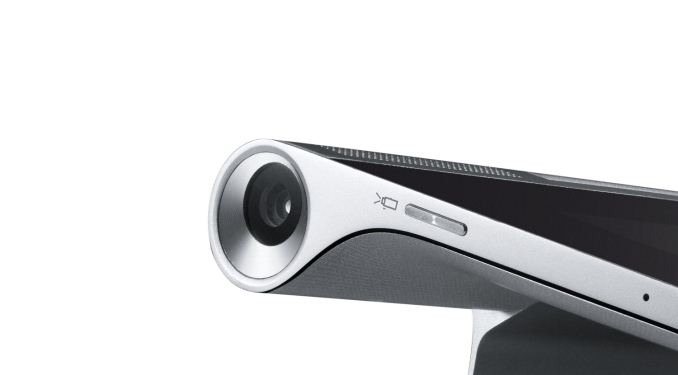 The Yoga 2 Pro is an excellent device, and it should only get better with Core M inside. The tablets offer unique features over other models, especially the hinge which houses a larger battery. We should be able to dig deeper into all of these products if we get review units.