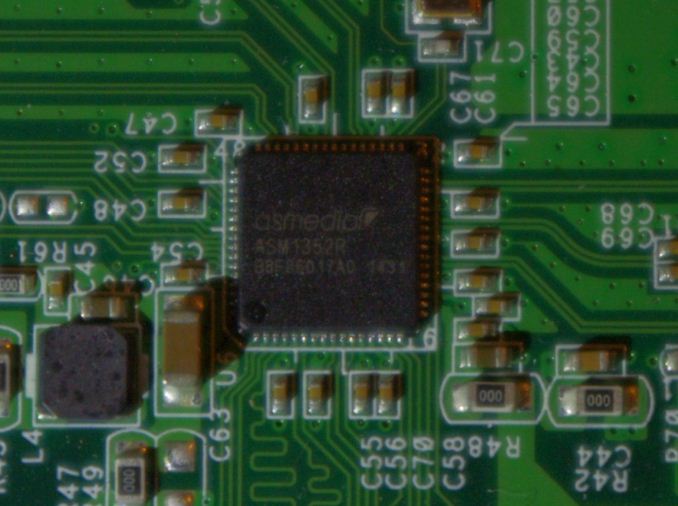 Everyone wants more. Everyone wants more storage space, faster access, cheaper costs. It should have been here yesterday, but we are restrained at the current rate of development which sometimes moves in strides or sometimes does the 1-2 quickstep. For anyone that owns a desktop, a laptop, or a portable device that needs charging, the USB standard is one such technology that would benefit from being faster, more efficient and less expensive. The USB ecosystem has seen aside several other standards during its tenure, and is now ubiquitous worldwide when it comes to data transfer and charging.

At CES 2015 we saw the first of a new wave of products ushering the latest standard from the USB Implementers Forum, USB-IF, known as USB 3.1. Since the movement to USB 3.0 taking over USB 2.0 in most first world business environments has taken a number of years, other standards such as Thunderbolt are projecting themselves to be a catch-all solution featuring data and display technology throughput with daisy chaining. USB 3.1 attempts to trump this by adding power to the mix, accepting a new type of reversible connector, and integrating itself by virtue of backwards compatibility with all the USB 1.0, USB 2.0 and USB 3.0 devices on the market.

We have covered USB 3.1 in several different articles since the first announcement:

The penultimate one is very important, as it indicates that USB Type-C will cover DisplayPort, USB 3.1 data rates and power all within a single specification, more so than Thunderbolt. The last one is one of the reasons for today’s article: MSI is bringing motherboards with USB 3.1 to market. At CES we saw two motherboards using ASMedia’s USB 3.1 controller, one with Type-A due to be released within the month (the X99A Gaming 9 ACK): 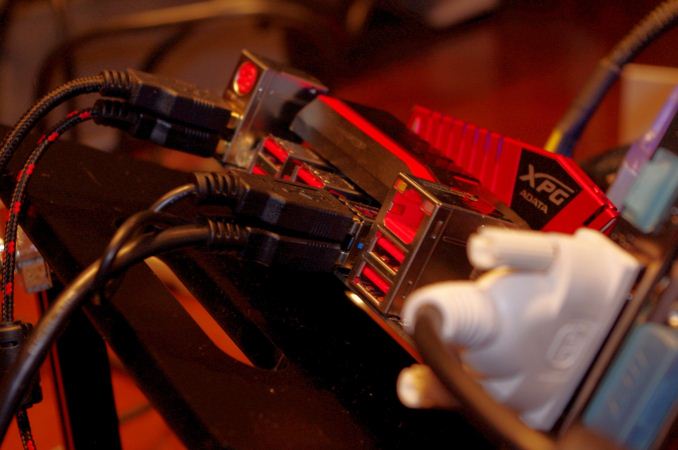 And another with Type C, which may be released next quarter (Z97A Gaming 6):

The controller requires two PCIe 2.0 lanes, meaning that the peak throughput for the Type A connectors overall will be 10 Gbps between the two, similar to the way a hub works. At the time of CES, the USB 3.1 speed demonstration hardware was hidden under a box and the press were not able to see into the box in order to get a look. We have worked with MSI to get a hold of this hardware and perform our own testing. 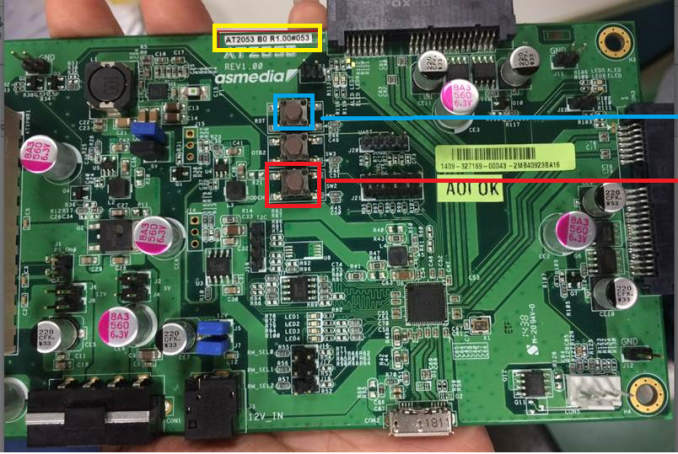 The hardware is an ASMedia testing board with the ASM1352R controller in place, connected to two SSDs. The board places the SSDs in a RAID-0 arrangement, striping the data between them and allowing the Micro-B to Type A to carry the data only. This board is typically used for validation of USB 3.1 data capabilities, rather than anything else. Due to the lack of USB 3.1 hardware on the market, this is ultimately the only way in order to see how far USB 3.1 can stretch its legs.

The X99A Gaming 9 ACK that MSI supplied has several USB arrangements for us to test: 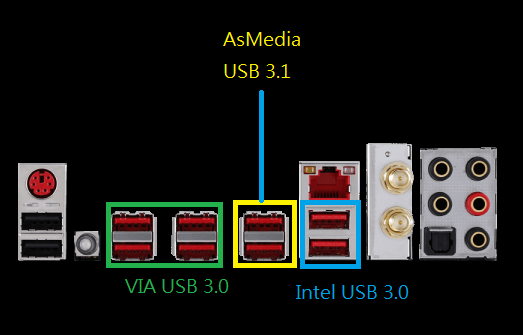 We are running Kristian’s usual gamut of sequential and random throughput benchmarks while running Windows 8 Build 9600. For USB 3.1, the two Intel 530 240GB SSDs are connected into the ASM1352R testing board, and this scenario was replicated for USB 3.0 and USB 2.0.

Also as part of this test, we subjected the drives to the motherboard copy test performed in our motherboard reviews. This involes a copy of 1.52GB across 2867 files, featuring 32 larger video giles and 2800+ smaller web based files. As a result, both short and sequential writes are required to perform well.

The best improvement in results from USB 3.0 PCH to USB 3.1, aside from the peak sequential speeds, is the Random Read/Write performance when paired with the better hardware. Moving from 31.1 MBps on the native Intel USB 3.0 side to 83.9 MBps with ASMedia USB 3.1 is a +170% increase. This allows USB 3.1 to still perform well while under random workloads or when several users/units are requiring bandwidth through a dock at once.

It is worth noting that in terms of CrystalDiskMark, USB-IF has shown faster when Josh was invited during IDF 2014: 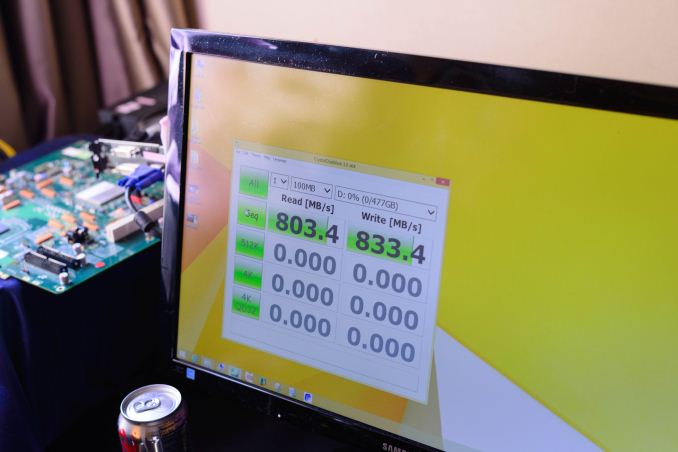 It is unclear exactly what system was being used, although Josh mentions it is a pair of SSDs behind a controller. This perhaps shows that the hardware we have at hand is not yet final, or USB-IF has better performing drivers than MSI were able to provide. USB 3.1 is technically good for 1.25 GB/sec, minus overhead due to the 128b/132b encoding (3%) and other functionality (sources state only 7.2 Gbps is useable, limiting peaks to 900 MBps). This would make numbers north of 800 MBps better received than the 650-700 MBps we were able to achieve.

All in all, USB 3.1 from the motherboard controller point of view is working. All we are waiting for is market adoption and the devices to start appearing that can use it. Unfortunately, my predictions lay it on more so for H2 2016 or H1 2017. I say this as a result of time scale adoption on USB 3.0, plus the added issues tied in with Type C connectors.

One of my best markers for gauging adoption rates is actually from trade shows like CES or Computex. I know that USB 2.0/3.0 becomes cheap enough when more of the faster drives is handed out with press kits than the slower drives. For example:

The 50/50 crossover happened sometime around Computex 2014. Now one can imagine that manufacturers at trade shows will want to showcase their data as fast as possible, but cost is a part of their showcase at the event. Thus optimistically that crossover point should mark as an indicator for the consumer market. Case in point: USB 3.0 is now only just getting cheap enough to account for the default selection for flash drives here in the UK. I recently purchased a few for install drives as well as a couple for family members. The first module offered to me was a USB 3.0 module, and the price difference between USB 3.0 and USB 2.0 was less than $1 for a 16GB drive.

USB 3.1 will take on the same pattern, if not a little elongated. The first USB 3.0 controllers started appearing on motherboards around the P55 era, circa Q3 2009. So if it takes about 5 years to move from USB 3.0 controllers to 50/50 crossover for the drives, I can only predict that it will take at least the same again, especially when Type C is added into the mix. One potential benefit that USB 3.1 could get is if Intel incorporate USB 3.1 into the chipset from an early stage. Given the fact that one USB 3.1 port needs two PCIe 2.0 lanes, if they are introduced as fixed ports, it will be at the expense of some of the other functionality, unless it can be incorporated into Flex IO.

One other aspect for adoption will be speed. Only the top USB 3.0 drives currently push the limits of the specification, or docking ports that can handle SSDs. So it will be a while before the basic run-of-the-mill flash drives can take advantage as they will have to device a better way to extract performance. But ultimately one of the benefits of USB 3.1 will be for docking, or external hubs that can take advantage of power plus data, especially on the go.

It will be interesting to see where USB 3.1 lands. It makes sense in the desktop space, although Apple is using Thunderbolt so we might have to rely solely on the Windows based notebook manufacturers for this angle. The usual suspects in the storage space will probably roll out USB 3.1 based devices and DAS in late 2015/Q1 2016, with more to follow.

Many thanks to MSI for supplying the hardware for this testing.

Edit 1/30: In the original posting of this piece, I had accidentally left in a sentence regarding testing USB 3.0 and USB 2.0 in a different device. This was an erroneous statement, accidentally left in after an old draft where I performed extra testing, but this has not been published. I can confirm that all testing published in this review from day one was performed with the ASMedia device in USB 3.1, USB 3.0 and USB 2.0 ports for a fair comparison. Apologies for any confusion.