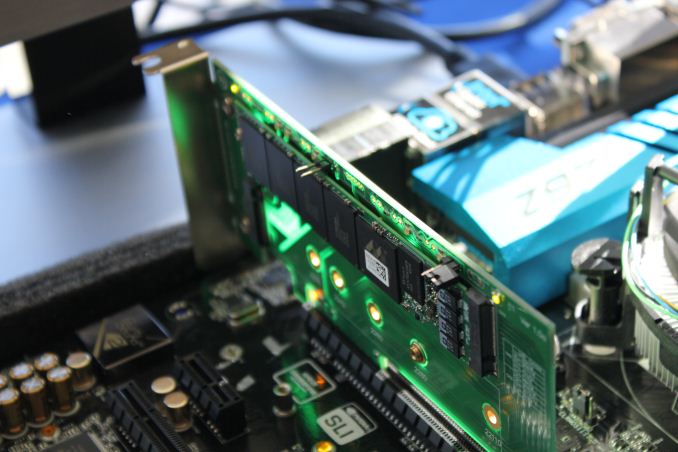 Plextor first showed off the M7e at CES earlier this year and at Computex we got an update on the release schedule. Plextor is now aiming for Q3 release, meaning that we will likely hear the final release at Flash Memory Summit in August. Specifications have not really changed since the M7e still utilizes the same Marvell PCIe 2.0 x4 AHCI controller with performance rated at up to 1.4GB/s read and 1GB/s write as well as up to 125K random read and 140K write IOPS. M7e will be available in both M.2 and PCIe card form factors with capacities range from 256GB to 1TB, so the M7e may very well be the first M.2 2280 drive to break the 1TB barrier.

Regarding the TLC drive M6V (or M7V as Plextor now calls it), Plextor is taking its time to fine tune the firmware to squeeze every megabyte of performance out of the drive and more importantly ensure high reliability and endurance. Plextor told me that its firmware can boost the endurance to 2,000 P/E cycles with 15nm TLC, so it the claim holds true then I'm fine with Plextor taking a little longer and pushing the release to 2016.

On the software side, Plextor actually had three new items to show. The first one is updated PlexTurbo, which now carries version number 3 and increases the maximum cache size to 16GB. The cache size is also now user adjustable and supports multiple disks, so one can decide what Plextor SSD to speed up with PlexTurbo.

The first new addition to Plextor's software suite is PlexVault, which creates a hidden partition for storing sensitive data. The partition is completely hidden and isn't even visible in Disk Management, so other users won't even know that such hidden partition exists. Accessing the partition works through a hot key, although a password can also be entered to protect the hidden partition from accidental access. I'm not sure how useful the feature really is, but I guess it creates another layer of security for NSFW (not safe for the wife) content for those who may need it.

The final piece of new software is PlexCompressor, which is an automated compression utility. If a file is not accessed for 30 days, PlexCompressor will automatically compress the file to increase free space. The file will then be uncompressed when accessed, which obviously takes a bit of the free space since the file will now be stored in uncompressed format for another 30 days. The compression is transparent to the user and is done fully in software (i.e. by the CPU), so it's not SandForce-like hardware compression. There is no impact on SSD performance, although as compression consumes some CPU cycles there may be impact on CPU heavy workloads and especially battery life. Out of the three pieces of software Plextor has, I think PlexCompressor is the most potent because it results in concrete extra free space for the end-user and with SSD prices still being relatively high (compared to HDDs) it makes sense to get the most out of the storage one has.