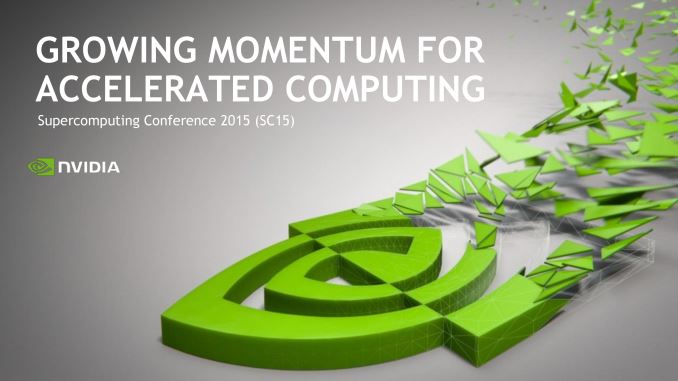 Continuing with our coverage of today’s spate of SC15 announcements, we have NVIDIA. Having already launched their Tesla M40 and M4 server cards last week to get ahead of SC15 news and leaks, the company is at the show this week showing off their latest Tesla products. NVIDIA needs no real introduction at this point, and these days their presence at SC15 is more about convincing specific customers/developers about the practicality of using GPUs and other massively parallel accelerators for their specific needs, as at this point the use of GPUs and other accelerators in the Top500 supercomputers continues to grow.

Along with touting the number of major HPC applications that are now GPU accelerated and the performance impact of that process, NVIDIA’s other major focus at SC15 is to announce their next US government contract win. This time the National Oceanic and Atmospheric Administration (NOAA) is tapping NVIDIA to build a next-gen research cluster. The system, which doesn’t currently have a name, is on a smaller scale than the likes of Summit & Sierra, and will be comprised of 760 GPUs. The cluster will be operational next year, and giving the timing and the wording as a “next-generation” cluster, it’s reasonable to assume that this will be Pascal powered. 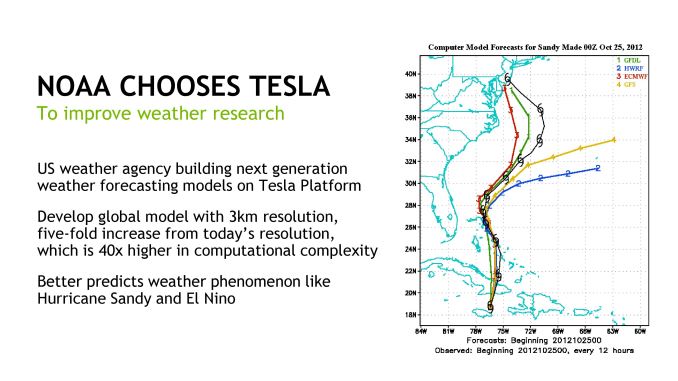 The purpose of the NOAA cluster will be to develop a higher resolution and ultimately more accurate global forecast model. To throw some weather geekery on top of some technology geekery, in recent years the accuracy of the NOAA’s principle global forecast model, the GFS, has fallen behind the accuracy of other competing models such as the European ECMWF. The most famous case of this difference in accuracy is in 2012, when the GFS initially failed to predict that Hurricane Sandy would hit the US, something the ECMWF correctly predicted. As a result there has been a renewed drive towards improving the US models and catching up with the ECMWF, which in turn is what the NOAA’s research cluster will be used to develop.

Weather forecasting has in turn been a focus of GPU HPC work for a couple of years now – NVIDIA already has Tesla wins for supercomputers that are being used for weather research – but this is the first NOAA contact for the company. Somewhat fittingly, this comes as the NOAA’s Geophysical Fluid Dynamics Laboratory already runs their simulations out of Oak Ridge, home of course to Titan.