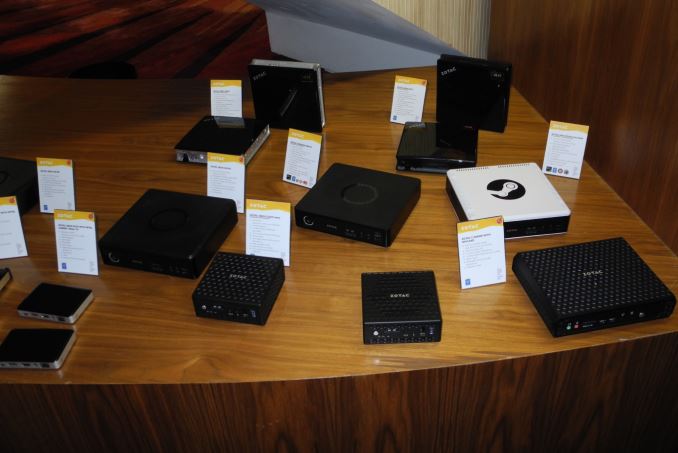 Zotac had announcements in multiple segments at CES. Obviously, the SSD entry was the big talking point with the PCIe variant boasting good performance numbers. Zotac also had a home automation announcement, the Cozee Smart Home Kit. The lineup will have ZigBee sensors, an IP camera and a gateway.The hardware and software / apps are not final and still being worked on. Therefore, I will postpone detailed coverage of that announcement and concentrate on the updates made by Zotac in the mini-PC space in this article.

Zotac had all their mini-PC models neatly arranged out in their suite. These included models such as the Steam Machine NEN that was announced back in November and the MI551 Skylake mini-PC announced last month. The number of models made my head swim (in a good way). In order to help navigate the available models, Zotac provided the press with a table which lists various features and the models that support them. The list is reproduced in the picture below. More information about the models that launched at CES is available below the picture. Pricing for these units is not available yet. 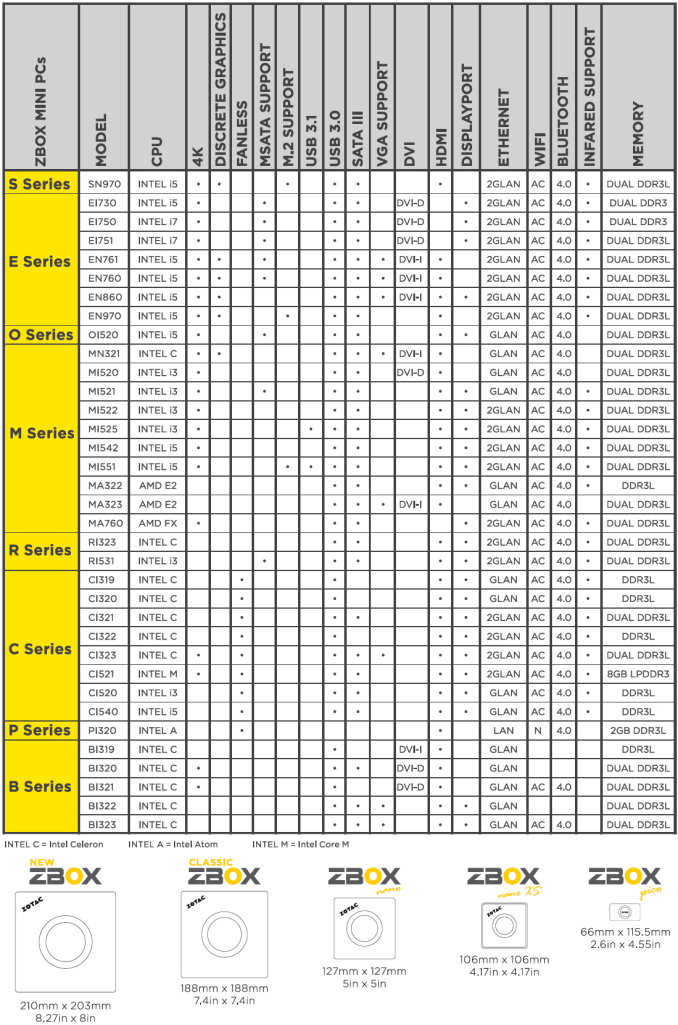 We reviewed almost all of the Zotac C-series PCs that started appearing in the market towards the end of 2014. Using the Y-series processors in a fanless chassis, they provided very good performance for users looking for compact and silent solutions. With Skylake, Zotac is going for a slightly larger and heavier solution, but the platform will support higher TDP CPUs (Skylake-U). The currently planned specifications are as below:

The gallery below provides some pictures of the chassis.

The Skylake C-Series is at least a quarter away from launch. So, it is possible that specifications might change before it comes to the market.

The gallery below provides some pictures of the exterior:

The gallery below provides some pictures of the chassis of both units:

The EI751 is the follow-up product to the ZBOX EI750, one of the Haswell Crystal Well-based mini-PCs equipped with Iris Pro graphics. The EI751 makes the move from Haswell to Broadwell while retaining an Iris Pro-equipped SKU. The full specifications are provided below:

The gallery below provides some pictures of the exterior:

The platforrm is similar to that of the PC Stick mentioned before (i.e, a Cherry Trail tablet board, but, in a pocket-sized form factor). The only difference is the chassis design and the availability of some extra display and I/O ports. The full specifications are provided below:

The gallery below shows the chassis of the Pico x7 (T4)

At CES, Zotac announced mini-PC models targeting every segment in the market space - from gaming enthusiasts to users looking for silent and compact HTPCs. They have, without doubt, the widest mini-PC lineup in the whole industry. It is hardly surprising, given that their ZBOX nano xs mini-PCs had come to the market even before the first Intel NUC. We are looking forward to having some of the announced units in for review over the next few months.