The Republic of Gamers (ROG) brand has been on the radar for a good five years now.  Initially in the form of motherboards, the ROG brand aimed to encapsulate everything that a gamer or enthusiast would need or require in a product.  ASUS have since expanded this philosophy to ROG branded video cards, laptops, sound cards and even pre-built desktops.  Today we are exploring ROG as a brand, probing the philosophies and testing some of the products - namely the range of X79 boards on offer: the mATX Rampage IV Gene, the gaming Rampage IV Formula, and the overclocker oriented Rampage IV Extreme. 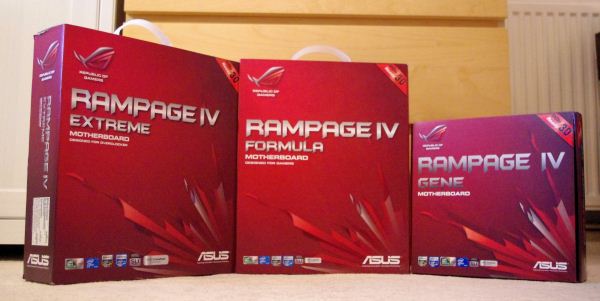 Reasons for this Article

Typically review websites review products and products only.  The branding is of little consequence – the advertising however may sway users to purchase one product over another more so than features.  At AnandTech over the past 18 months, we have chosen mainly to tackle mainstream motherboards that would fall under the scope of a decent proportion of our readers.  This tended not to include the ROG series, due to their focus on gamers and enthusiasts, even if price points were similar.

ASUS approached me several months ago to discuss us covering the X79 product range in a series of reviews.  Internally, I was a little reluctant, given my comments above.  However, on reflection, I wanted to use this opportunity to explore the ROG range for what it really is.  ASUS have allowed us access to members of the ROG team to ask questions throughout the review and analysis, including some questions to key members who decide what exactly goes on the motherboards.

So in short, this article now has a distinct purpose.  To expose the internals of the Republic of Gamers, to find out how the product line and those behind it really tick.  We will analyze the philosophy behind the branding, the advertising, before tackling several key ‘halo’ products, involving the hardware and software features as well as indicating the segmentation across the range.

The Republic of Gamers brand is an attempt at a way of thinking.  By conversing with gamers, and hiring oriented specialists in their respective fields, ASUS use the ROG brand to offer both their halo products and allow a justification for showcasing new and improved technologies.  What we currently see advertised and on the shelves is a progression of design and marketing aimed a several distinct groups of users.

After casual and OEM users, gamers are the biggest market for computer electronics.  In their systems, they want to be able to buy or build the best equipment they can in order to give them the edge.  As a result, we obviously have specialized SKU lines from multiple manufacturers aiming to capture a proportion of the gamer market share for computers and computer components.   After gamers come enthusiasts, which could be sub-divided into performance enthusiasts, overclockers (both 24/7 and competitive), audio enthusiasts, and so on.  In a Venn diagram of these groups, ASUS aims to attack the gamers and the performance/overclocking enthusiasts with their Republic of Gamers motif and brand.

As a technical exercise, back in late 2006 ASUS released their first Republic of Gamers motherboard.  At this point, ASUS were testing the waters, to see if there was a market for this sort of product line, after the earlier success with their A8N32 series of motherboards.  As a result, the branding was not fixed and the styling was not as concrete as it is today.  The original logo featured an orange and grey ‘G’ motif (below) on the chipset heatsink, along with casual ASUS styling.

ASUS are keen to point out that the origins of their ROG product line (before it was formally marketed as ROG) resulted in the first board to market with NVIDIA SLI.

Fast forward five years and we are inundated with a red and black styling.  The orange and grey ‘G’ has gone, and is replaced with red and grey style R/G logo (it took me a while to spot it was an R and a G) which ASUS casually like to implement in marketing, such as on the faces of soldiers in pseudo-video game style to look like a companion heads-up-display.  The motherboards are styled in distinct red and black, but they are also the platform to introduce new technologies that other manufacturers will not consider or do not have the resources to do.  The Republic of Gamers brand could be considered the Mercedes S Class of gaming.

Along with the styling, ASUS attempt to ensure that the users of their ROG products have prioritized access to customization tips, hints and also repairs.  As a result, we have the ROG Forums (discussed later) with ASUS employed experts who write guides at varying levels of complexity for their users to adjust and tweak the systems.  These experts also help diagnose errors with hardware conflicts or overclocking.

Throughout this look and review, I have been in constant contact with ASUS in order to make sure that all the facts are straight and also to quiz them on the fundamentals of the ROG brand.  My mentality from conversing with ASUS is that ROG is here to stay, and they feel that the ROG brand brings in enough income to justify the push towards more focused hardware and the aim of bringing what they consider the best components into the hands of users.  The global mission statement for ASUS ROG is - "The Republic of Gamers is committed to producing the most innovative hardcore PC performance hardware, enabling the ultimate computing experience for gamers and enthusiasts worldwide".

By heavily advertising their high-end halo brands, ASUS aim to filter users down to whichever boards they require.  At a lot of the top gaming events worldwide over the past few years have been done in conjunction with ASUS in an effort to help users get to grips the brand and the products.